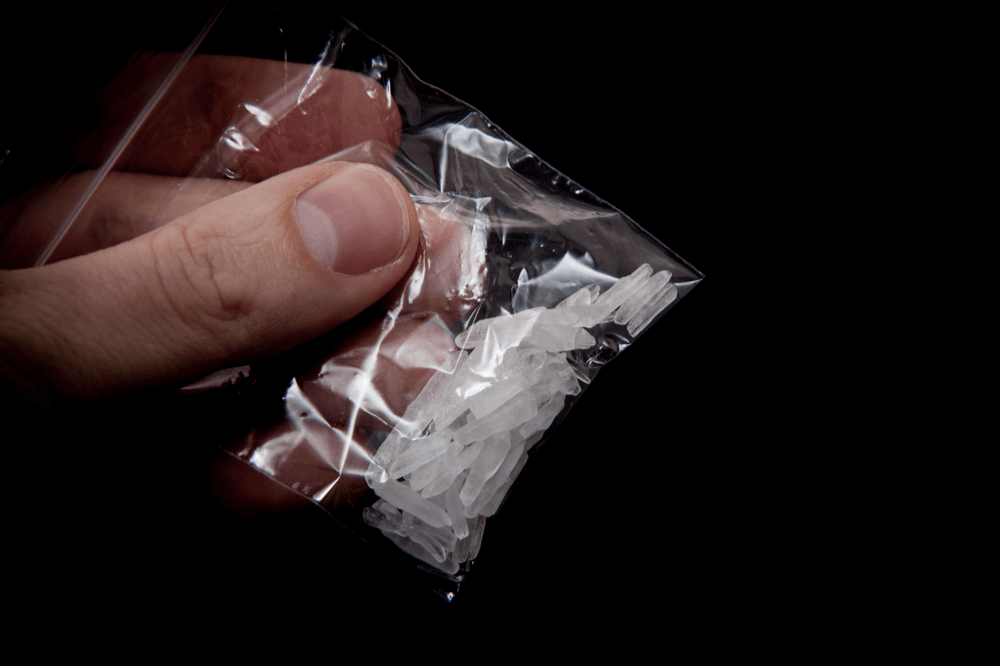 Methamphetamine, or Meth, is a highly addictive stimulant with a wide range of devastating physical and psychological side effects. It goes by several street names including ice, glass, speed, crank, crystal, and zoom. Meth can be smoked, swallowed as a pill, crushed and snorted, or injected. Its effects can cause increased physical activity, wakefulness, a sense of euphoria and excitement, decreased appetite, fast, shallow breathing, and increased temperature and blood pressure.

For a long time, meth was manufactured from ephedrine but in the past few decades, a newer cheaper form of meth has emerged, increasing meth addiction across the US. This new form of meth can be produced from a wide variety of cheap toxic chemicals and cause even more physical and mental damage to its users.

The History of Meth

Methamphetamine was developed as an alternative to the ephedra plans, whose active ingredient is ephedrine. It was originally invented by a Japanese chemist in 1893 but it wasn’t until 1919 that another Japanese chemist, Akira Ogata, created a more efficient way of making it by using phosphorus and iodine to crystalize ephedrine, thus creating crystal meth. Early on it was used as a medical treatment for weight loss, asthma, and narcolepsy.

Meth has a link to World War II when both the Allies and Axis powers used the drug to keep soldiers awake. Methamphetamine triggers a body response that is similar to adrenaline, including heightened alertness and increased risk-taking. After the war, meth use increased greatly, even after the US outlawed it in 1970. The harmful effects of meth, which included paranoia, delusions, abnormal heartbeat, and heart failure, had become obvious.

The American criminal world rediscovered the ephedrine method of making meth in the early 1980s. Ephedrine was commonly found in over-the-counter decongestants like Sudafed. The market for meth grew because of how readily available ephedrine was. Meth was easily made because it just required tweaking the ephedrine molecule and that required basically following a recipe.

Southern California was the hotbed for meth production. Mexican drug cartels were supplying biker gangs with ephedrine, which was not regulated in Mexico. This resulted in a surge of homemade meth labs.

There was another way to make meth and was commonly used by the Hell’s Angels and other biker gangs. This method used a clear liquid called phenyl-2-propanone, or P2P. A wide range of legal, cheap, and toxic chemicals could be used to make P2P, chemicals used in a wide array of industries including racing fuel, perfume, gold mining, and photography. These chemicals could not be restricted the same way law enforcement had done with ephedrine.

This P2P method offered meth producers and traffickers a huge advantage. A trained chemist could come up with countless ways to create P2P. With full access to the world’s chemical markets through Mexican shipping ports, production could be ramped up and quantities were limitless

The Hell’s Angels and Meth

With this new, cheap form is meth, it could easily be manufactured. Just as the drug cartels in Latin America lead the manufacturing and distribution of cocaine, the Hell’s Angels were the main producers and suppliers of Methamphetamine in the US. During the 70s and 80s, they changed from a wild motorcycle gang into a national drug syndicate. They produce methamphetamine independently and also with help from the Mexican drug cartels.

The rank smell of cooking meth forced the labs to be out in rural and desert areas. Slowly, there was an uptick in independent meth labs and Hell’s Angels were not the main supplier of meth anymore. As some American states legalized marijuana, pot revenue fell, forcing many growers to switch to producing meth. The drug became more prevalent in the Southwest and supply started flowing east, all the way to New England.

Mexican drug cartels were never able to keep up with the demand for methamphetamines across the US by just using ephedrine. This new cheaper, P2P method allowed for larger quantities and for more people to be able to manufacture it. This caused the price of meth to fall from $14,000 a pound to $1,200 a pound. Meth is now readily available and is relatively inexpensive, causing a meth epidemic across the US.

As P2P meth spread nationwide and so did the fear of fentanyl, a dangerous synthetic opioid, opioid users switched over to meth en masse. Even though meth overdoses are much less common than opioid ODs, they are still on the rise. Meth is more likely to cause a person to decay over time rather than overdose.

The Substance Abuse and Mental Health Services Administration (SAMHSA), reports meth use is on the rise with 1.4 million Americans over the age of 12 reporting using meth in 2016. Meth-related emergency room visits rose from 68,000 in 2007 to 103,000in 2011.  About 60% of these ER visits were a result of combining meth with other substances. A dangerous and fatal practice called “goofballing”, which is using meth and heroin together is on the rise as well.

For decades, crack cocaine had been the drug of choice in Los Angeles’ Skid Row. Now with this new meth that is everywhere, Skid Row is seeing a higher use of meth. Law enforcement has suddenly seen an increase in the numbers of mentally ill, especially in the homeless population. They are seeing that Meth is now causing long-term psychosis, like what is seen in schizophrenic patients, that is lasting even after the person stops using.

According to LA county statistics, meth-related deaths in Los Angeles increased tenfold between 2008 and 2018. COVID-19 has exacerbated the methamphetamine addiction problem. In 2020, fueled by the pandemic, LA saw a marked increase in deaths linked to an accidental meth overdose. There was also an increase in relapse cases due to addiction meetings being shut down.

Effects Of Meth on The Brain

Ephedrine meth tended to cause physical and mental damage gradually, over years. This new cheap P2P meth has accelerated that damage, especially to the brain. It is causing a quick deterioration in mental health and producing a new population of mentally ill Americans.

The effects of meth on the brain tend to be quite similar with symptoms such as hallucinations, paranoia, isolation, conspiracy theories, massive memory loss, and jumbled speech. As a neurotoxin, it causes damage no matter how it is derived, but P2P is causing a steeper decline in brain function. There is even evidence showing people in their 30s and 40s with no prior history of mental illness being diagnosed with schizophrenia and bipolar disorder, an affliction that usually begins in much younger years.

Long-term abuse of methamphetamine has shown alternation in the parts of the brain in neuroimaging studies. These studies have shown severe structural and functional changes to parts of the brain associated with emotion and memory. These people also show symptoms of anxiety, confusion, mood disturbances, violent behavior, and insomnia.  Physical effects can include weight loss, tooth decay, and skin sores.

Repeatedly using meth has many negative consequences including addiction, which causes molecular changes in the brain. Just like many other drugs, tolerance to meth develops over time and users need higher doses to get the same desired effect. Repeated users may develop difficulty feeling any sort of pleasure without the drug, causing abuse.

Chronic use also causes withdrawal symptoms when the abuser stops taking the drug, with symptoms such as fatigue, anxiety, intense cravings, chills, nausea, and diarrhea. But some of these physical and mental effects have shown to be at least partially reversible.

As in many other drug abuse cases, the sooner a person gets help from methamphetamine addiction, the better the outcome and a lower possibility of permanent damage.  When a person cannot control their use of meth, they most likely need professional help in the form of a meth rehab center. At Resurgence Behavioral Health, we can recommend an ideal course of treatment based on the individual’s needs with the help of one of our addiction specialists.

If you or someone you love is struggling with meth addiction, we can help. Please give us a call today and get started with a personalized plan to get you on track to living the healthy life you imagined.

Learn about a new “cheap form of meth” that is taking America by storm.#methamphetamine #resurgencehttps://t.co/A2jGf0OuaA